Mindful Journalism in a nutshell: @journlaw keynote to JEANZ

EARLIER this month I had the honour of delivering the keynote address to the Journalism Education Association of New Zealand annual conference in Christchurch. 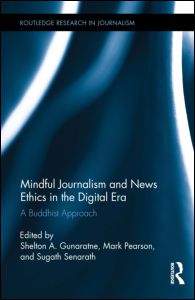 The topic was “Mindful Journalism: towards a new ethics of compassion”, and I offer the summary here (pdf: JEANZMindfulJsm2014) in the form of my Powerpoint slides presented at that conference.

The term ‘mindful journalism’ is a concept I introduced more than a year ago in the inaugural UNESCO World Press Freedom address at AUT University Auckland, drawing upon the earlier substantive work by esteemed colleague, Emeritus Professor Shelton Gunaratne, who has been working for decades on the intersection between Buddhism and journalism.

I developed my application of this in a paper to the International Association for Media and Communication Research (IAMCR) conference in Dublin in July 2014, which was revised for publication as a forthcoming article in Ethical Space due to be published this month (December).

Professor Gunaratne and I refined our thoughts further in a book co-edited with Sri Lankan colleague Dr Sugath Senarath [pdf file] from the University of Colombo, with Professor Gunaratne as lead editor and contributions from a range of other scholars.

Routledge New York accepted our proposal for hard cover publication in March 2015 as part of its Research in Journalism series.

Our book is titled Mindful Journalism and News Ethics in the Digital Era: A Buddhist Approach and it features chapters by several scholars from Asia, North America, Australia and Europe. Please see the publisher’s synopsis.

My address to journalism education colleagues in Christchurch this month picked up on some of the key themes of Mindful Journalism, particularly those linked to the Eightfold Path.

My key point was that one does not have to be a Buddhist to incorporate the key principles of mindful journalism into one’s work. In fact, most of these same moral principles are evident in the teachings of all the world’s great religions. However, for those who lack a moral framework for their ethical decision-making, a secular application of these non-theistic principles can offer a moral compass to those who feel they lack one because they offer a series of normative or aspirational goals we can strive for, but rarely reach. They also provide a schema for the analysis of ethical decision-making by journalists.

One response to “Mindful Journalism in a nutshell: @journlaw keynote to JEANZ”