[Extracted from my public lecture ‘Social Media – Risks and Rewards’]

We hear a great deal about the downside of social media use in schools. There have been well publicised examples of cyberbullying, defamation of teachers and principals, stalking of children by online sexual predators, and the dismissal of teachers for their own misuse of the medium. As a journalism academic, I can tell you that these make news because they involve deviant behavior, they result from important changes in society, they typically involve some sort of conflict or intrigue, and they are unusual enough to be interesting to audiences. They are not the norm, which explains their newsworthiness.

The norm is actually the millions of social media postings that are either mundane – like YouTube clips of cats – or are actually performing some public good – providing online counseling and support to those in need; creating useful communication channels between children, peer groups and parents; and opening a wealth of learning opportunities if managed appropriately. Of course, none of this means that we should ignore the risks – only that we should take steps to manage them and work with the medium within a relatively safe environment.

One Gold Coast private school made the local television news earlier this month with its principal’s bold announcement that he was banning social media use by students while at school. The school’s published policy also prohibits mobile phones and other entertainment devices (ASAS, 2009). This policy is known in the literature as the ‘lock and block’ approach. It is clearly one option available to schools and is risk averse in that it reduces the likelihood of the misuse of social media platforms during school hours. But is it a little like the Mercer Hotel in New York banning the use of telephones because Russell Crowe happened to disconnect a faulty one and hurl it at a worker in the foyer?

If we seek to assess the educational opportunity cost of such a policy measure, we can look to the academic literature tracking the teaching and learning benefits of social media platforms. The European eTwinning project was established in 2005 as the main action of the European Commission’s eLearning Programme. Its Central Support Service is operated by European Schoolnet, an international partnership of 33 European Ministries of Education developing learning for schools, and its portal has 170,000 members and over 5300 projects between two or more schools across Europe. Its profile states:

Whenever we talk about internet safety we must also talk about responsible use. Similarly, when we talk about the safe use of social media we must also talk about the responsible use of social media. Unfortunately some people still believe that the only way to keep children safe online is to ‘lock and block’ access to parts of the internet though web filtering. The reality of this is that this doesn’t remove the actual dangers (perceived or otherwise) and it also makes it almost impossible for educators to deliver key internet safety and responsible use messages. The fundamental requirement to keeping children and young people safe online is to make sure that they have received an appropriate education in how to use tools and services appropriately. (eTwinning, 2012). 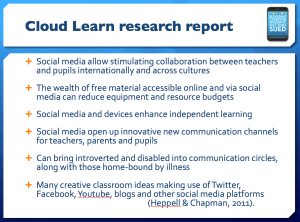 Some teachers have become quite activist in their opposition to a ‘lock and block’ approach, with the arguments of UK schools challenging this approach articulated in the Cloud Learn Research Report. Their main points are:

–       they can bring introverted and disabled students into communication circles, along with those home-bound by illness 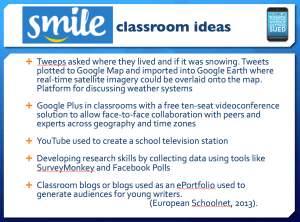 European Schoolnet’s SMILE (Social Media In Learning and Education) action research project offered some examples of effective in-class use of social media, including:

–       A Twitter snow lesson where a teacher’s Twitter network was asked where they lived and if it was snowing. The tweets were plotted on to Google Map and imported into Google Earth where real-time satellite imagery could be overlaid onto the map. The pattern that emerged provided an excellent context for discussing the weather, weather patterns and weather systems;

–       Google Plus in classrooms with a free ten-seat videoconference solution to allow face-to-face collaboration with peers and experts across geography and time zones;

This latter example raises the issue of the importance of written expression, particularly via blogs, for students. Writing in the journal The Psychiatrist, researchers Wuyts, Broome and McGuire (2011) cited several studies that demonstrated that keeping a personal blog could ‘have a therapeutic effect, by reducing stress and improving subjective well-being, and could be considered especially useful for people experiencing mental health problems’. This was because self-disclosure on a blog could impact on someone’s perception of their social integration and their so-called ‘bonding social capital’. The study focused on extended written blogs rather than social networking or ‘micro-blogging’ like Twitter and Facebook, but the sensible use of social media could have the same benefits, as found recently by a team of researchers from the Australian Catholic University here in Brisbane. They concluded:

“Facebook use may provide the opportunity to develop and maintain social connectedness in the online environment, and that Facebook connectedness is associated with lower depression and anxiety and greater satisfaction with life (Grieve et al, 2013).” 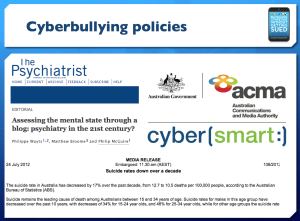 Despite the benefits, there is no disputing the sad fact that practices like cyberbullying continue. It is indeed that sensible or ‘mindful’ use of social media that should inform social media policies in schools, education departments, and in other government and corporate organisations. Cyberbullying has been a key point of focus and education systems have now developed policies in this area. The Australian Communications and Media Authority (ACMA) has an excellent ‘cyber(smart):’ site with a wealth of resources and lists the various education systems’ social media and cyberbullying policies (ACMA, 2013). For example, the Queensland Department of Education, Training and Employment features guides for parents, teachers and students at its Cybersafety site (DETE, 2012). At least the Education Department does not devolve the responsibility for cyber-safety to an automated Internet filter. Its site states: “Being cybersafe and a good cybercitizen is primarily about learning how to behave in the online environment. While technical solutions are part of ensuring safety and security, cybersafety in schools depends on people acting appropriately.” (DETE, 2012).

It is sage advice. Administrators and parents are indeed concerned about social media – partly because the little they know about it has been informed via the lens of the news media and war stories like those I have related above. Their perceptions are also skewed by the new industry of cyber-safety – everything from net nanny systems for your IT system through to speakers and consultants ready to advise on the evils of trolls and cyber-predators. I am not suggesting such inputs are unnecessary, but I wonder about their impact on policy at a time when parents and administrators are already approaching Web 2.0 with trepidation.

With all these resources committed to it, one might be excused for believing cyberbullying had driven young people to the depths of depression and anxiety and were consequently taking their own lives at an alarming rate. The fact is that in the decade 2000-2010 – a period during which both Internet and social media usage grew rapidly – youth suicide in Australia actually declined. It declined across the whole 15-24 year age group, with suicides among males in that age group decreasing by 34 per cent. That is not to say, however, that the rate of youth suicide is not alarming. The number of suicides is still far too high and like all stats this figure can have a range of explanations – better counselling, changes in media coverage, the efforts of campaigns like Beyond Blue and RU OK? (partly on social media),  and improved medicines for psychiatric conditions. Indeed, the policy measures noted above might well have helped save a few young lives. While it is tragic for any young person to take their life for such a reason, there seems to be no hard data that Internet and social media usage is driving more young people to this level of despair (ABS, 2012).

After all, social media is in many ways just a microcosm of our broader lives, and problems like bullying have always existed. These platforms present new channels for the demonstration of such behaviours, replacing or supplementing replacing the schoolyard taunts, the prank calls, the practical jokes and the toilet graffiti.

See the full lecture at: https://journlaw.com/2013/08/29/social-media-risks-and-rewards-journlaws-public-lecture/