A leading US medical ethics expert says a conflict of interest should be declared by the author of a medical journal article if he has a popular diet book on the market.

The comment follows this week’s revelation by journlaw.com that the best selling diet book author Dr Michael Mosley had co-authored an article in the British Journal of Diabetes and Vascular Disease but had not declared a conflict of interest.

Adam Marcus, co-founder of Retraction Watch and managing editor of Anesthesiology News, rejected the explanation offered by the authors and editors that the review article did not need to declare a conflict of interest because the diet book  The Fast Diet was not cited.

“If the article is indeed plugging the diet or could reasonably be construed as endorsing it, even implicitly, then clearly there is a conflict of interest, and that conflict should be disclosed,” he said.

“I think COPE [the Committee on Publication Ethics] would agree that the default should be declaring conflicts rather than ignoring them.”

He said some journal editors have taken the extreme measure of retracting an article with undisclosed interests.

“We certainly have seen cases of retractions for undeclared or insufficiently declared conflicts of interest,” he said.

“How journals address them varies but can include corrections or retractions as the editors see fit.”

He gave the example reported in Retraction Watch of an obstetrics and gynaecology journal that retracted an article in 2011 over an undeclared conflict.

Marcus said the authors would be obliged to declare such an interest in any future scientific journal articles. 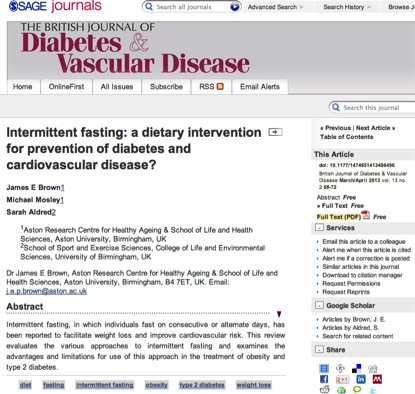