Is your blog ‘in the public interest’ or just ‘interesting to the public’?

[Adapted from my new book  – Blogging and Tweeting Without Getting Sued: A global guide to the law for anyone writing online (Allen & Unwin, 2012).] 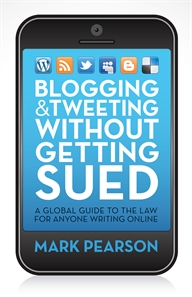 Is your blog ‘in the public interest’ or just ‘interesting to the public’?

If something you have posted becomes the subject of legal action, lawyers, prosecutors and judges will usually look to your motives for publishing the material. In some places those motives can actually form a defence, while on other occasions your motives can be your undoing. But two are worth considering here because of their very different impact on the law – ‘public interest’ and ‘malice’.

Many statutes and court rulings use the expression ‘public interest’ as an element of a defence to a range of publishing crimes and civil wrongs. In such matters you would have to convince the court that some greater public good came from the material you published and that society benefited in some way as a result. You would normally need to show that any public benefit outweighed the harm that was caused by the publication, which is normally the reason you are called to account. For example, your defence to a defamation action might be that it was in the public interest that your audience learned of your corruption allegations against a leading politician, even if you could not quite prove that the allegations were true.

Many jurisdictions offer a ‘public interest’ or ‘qualified privilege’ defence for defamatory material about extremely important public issues but the publisher might not have quite enough evidence available to prove truth and other defences might not apply.

It’s important to distinguish here between matters of legitimate ‘public interest’ and other matters such as celebrity gossip which might be just ‘interesting to the public’.

Even so, under special protections in the US writers can get away with false publications about celebrities and other public figures as long as you are not being malicious in your attacks. Again, you need to be wary of less forgiving laws in other places, particularly if the celebrity has a reputation they wish to defend elsewhere – perhaps the Australian actress Nicole Kidman or the New Zealand film-maker Peter Jackson.

In other countries the public interest or qualified privilege defence normally requires you to show that you acted in good faith and made proper enquiries in the lead-up to your defamatory publication, despite being unable to prove its truth.

Journalists may be better positioned to make use of this defence than so-called ‘citizen journalists’ or amateur bloggers because they have been trained in research skills and verification practices.

However, there has been nothing to indicate that bloggers or social media users will not qualify for the defence because of what they do. In fact, the Minnesota District Court granted a Republican blogger Michael Brodkorb the same rights as a traditional reporter when he had cited an anonymous source to accuse a Democratic political advisor of self-interest.

In some areas of the law the words ‘public interest’ are not used, but the defence itself has come from a balancing of public interests against other rights. For example, copyright law in most countries has a range of ‘fair use’ defences so that parts of copyright material can be republished for the purposes of education, news or critique.

The defences exist because politicians have decided that there is a greater ‘public interest’ in the community being educated and informed about such important matters than in protecting the intellectual property owned by the creator of the work. As many judges have pointed out, ‘public interest’ does not equate with ‘interesting to the public’, and you should not be allowed to destroy someone’s reputation or invade their privacy simply because your gossip is particularly saucy.

By far the best known right to free expression is the First Amendment to the US Constitution. It states: “Congress shall make no law … abridging the freedom of speech, or of the press.” The US Supreme Court has interpreted the First Amendment very broadly and has applied it across media to a whole range of publishing situations. It certainly applies to the material bloggers, Facebook users and tweeters create – particularly if you are commenting on matters of public importance.

In a series of media decisions throughout the 20th century the Supreme Court allowed newspapers and broadcasters to use the First Amendment to bolster their defences against laws affecting their publications. This was especially useful in defamation law where a whole defence developed allowing the media to publish libellous material about a public figure as long as they did not know it was false and they were not being malicious.

The First Amendment is so entrenched in US society that bloggers sometimes operate under the assumption this same protection will apply in other parts of the world. Unfortunately, it does not.

Is deception in the public interest?

Sometimes bloggers will use the age-old journalistic excuse for deception – that it was in the ‘public interest’. That was the argument Cuban exile Luis Dominguez gave for adopting the guise of a 27-year-old female Colombian sports journalist to trick Fidel Castro’s son into sharing details of his opulent lifestyle. As the BBC reported, the blogger posted images and documents taken from his online flirting with 40-year-old Antonio who had a penchant for both sports and women.

“I’m a Cuban and I’m a Cuban American and I have not been able to go back to my country since 1971 when I left,” he told the BBC. “I use whatever tools I have to be able to get back at these people. In Cuba people are put in prison for no reason at all. Their rights are violated… So, why can’t I do the same thing to them? I have no remorse whatsoever.”

While ‘public interest’ might be a worthy moral motivation for your deception, it will rarely work as a defence in its own right, particularly if your actions are criminal. Get sound legal advice before relying upon it.

One response to “Is your blog ‘in the public interest’ or just ‘interesting to the public’?”