Prejudging justice – lessons from the US 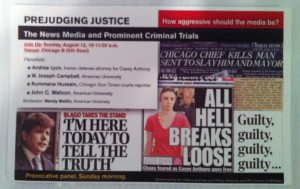 Her experience in that case and many others has informed her critical view of the US approach to high profile trials, which she explains in detail in a recent article in the Reynolds Courts and Media Law Journal.

Lyon has formed the view that publicity generally hurts a criminal defendant and leads to a presumption of guilt rather than innocence in the minds of jurors.

It is worth considering the views of Lyon and her fellow panelists at a time when courts in Australia and other Commonwealth jurisdictions are looking to the US example as a potential salve to their growing concerns about prejudicial Web 2.0 coverage of trials.

One view is that the only option is to move to a US system where the solution is via instruction to jurors to avoid accessing social media materials related to the case, sequestering juries or moving trials to a new location distant from the heat of publicity.

Professor W. Joseph Campbell from American University gave an insight into the lengths US journalists have been willing to go in their coverage of sensational crimes.

The antics of newspaper journalists during the 1897 ‘sausage murder’ trial in Chicago far outstrip the more recent phone hacking sins of News of the World reporters and private eyes.

As Campbell explained, journalists were so desperate to hear the deliberations of the locked jury in this case that they lowered a reporter from the Independent by rope down an air shaft from the attic of the courthouse building so he could listen to the jurors’ discussions and relay them back to his co-conspirators using a hose.

Chicago Sun-Times courts reporter Rummana Hussain explained this would never be attempted or tolerated today, given the hurdles presented to her and other media in the recent Balfour murder trial where the victims were relatives of celebrity Jennifer Hudson, prompting substantial media attention.

Hussain was left to negotiate with the judge the reporting permissions of the whole press contingent and was able to extract the privilege of using cellphones to communicate from the court to their newsrooms via text messages.

But she could not convince him to allow live tweeting from the courtroom – only from the overflow room where the proceedings were televised.

Even that arrangement was suspended for a day by the irate beak after a reporter’s phone sounded in the court after his numerous warnings to place them in silent mode. Hussain explained she even had to play attorney and present to the court an argument on why the media should be granted access to tapes played during proceedings.

American University journalism professor John C. Watson drew upon communication news framing theory to propose that journalists should frame their court and crime stories in terms of what citizens needed to know instead of merely what the public wanted to know.

“The press create a scenario in which the defendant is assumed to be guilty,” he told the audience. “The press has framed the case from the prosecutorial perspective.”

He said the judiciary was potentially the most dangerous branch of government with real potential to deprive citizens of their constitutional rights to life, liberty and their ability to pursue happiness.

“The judicial process can kill innocent people and the press are the first line of defence against that,” he said.

“Journalists have to remember they are reporting for the primary purpose of protecting the people against their government.”

He pointed to an emerging crisis with the coverage of trials on social media, and suggested the British system where there was “no reporting until afterward” might be a preferable alternative to the US approach.

But the panel’s “star witness”, Andrea Lyon, took the line that open coverage was important to the judicial process, but must be exercised responsibly.

“The prosecution already has a lot of power – there are almost no brakes on it,” she said. “There are no brakes on framing someone. The only way we’ll have brakes is through fair reporting.”

She took issue with the privacy invasion and voyeurism of coverage in sensational trials.

“I’m sick of my clients’ and victims’ terrible stories becoming fodder for cheap entertainment,” she said.

She was physically assaulted twice during the Casey Anthony trial and was angered when a major newspaper republished a blog detailing the time she would arrive at court and contemptlated “the trouble they would get in for just hitting me rather than hitting me with a bat”.

She wrote in the Reynolds Courts and Media Law Journal article: “What is troubling is the public’s fascination with this case, the need to make Anthony a villain, and how the media helped feed this mob mentality.”

“They landed, heavily, on any witness who spoke up in Anthony’s favor, making witnesses extraordinarily difficult to find and interview because everyone was afraid of the backlash from the public and the prosecution,” Lyon continued.

She told the seminar she regretted the negative influence of the television program “Law and Order” on the public perception of courts and trials, as well as the rise of “expert” court commenters who typically knew little about the specific cases they were discussing but were fodder for television commentary because of their legal training.

Social media aggravated the situation, she said, with more than 100 blogs devoted to the Casey Anthony case.

Australian, New Zealand and British policymakers could learn much from this session as they contemplate a future of more open public discussion of prominent trials in social media – even if tough restrictions on the legacy media are maintained.

This “two-speed” approach might well keep the pages of the press and the airwaves of radio and television free of prejudicial material.

But it is naive to think that prospective jurors and witnesses will not venture onto blogs, Facebook and Twitter to get every salacious detail on a celebrity accused in the next big Whodunnit.

Short of effective controls across jurisdictions in cyberspace, which appears unlikely, it seems the integrity of the jury system will rely on effective instructions to jurors and better justice education for the broader citizenry.

2 responses to “Prejudging justice – lessons from the US”