[Extracted from my public lecture ‘Social Media – Risks and Rewards’] 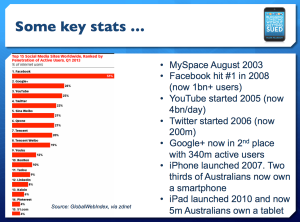 Social media and the broader devices and applications associated with Web 2.0 have become part of our lives over the past decade. It is exactly 10 years ago – August 2003 – that a social networking platform you might remember – called ‘MySpace’ – was launched in California.

It was the number one social networking site in the world from 2005 until 2008, when it was surpassed in popularity by Facebook, which now has more than a billion people using it at least once per month.

Youtube started in 2005 and now boasts more than 4 billion video downloads per day.

The microblogging service Twitter was launched in 2006 but only really gained traction from 2008. It now claims more than 200 million active users.

As Figure 1 shows, Google Plus – launched just two years ago – has overtaken both Youtube and Twitter. Twitter claims 60 per cent of its users log in via a mobile device at least once a month (Schreiner, 2013). And that’s the other story. The iPhone was only launched in 2007 and now two thirds of Australians own a smartphone (AAP, 2013). The iPad was born in mid-2010 into a market segment that many experts thought did not exist. Now more than five million Australians carry a tablet computer (Moses, 2013).

See the full lecture at: https://journlaw.com/2013/08/29/social-media-risks-and-rewards-journlaws-public-lecture/