The Australian Government’s passage this week of the National Security Legislation Amendment Bill (No. 1) 2014 is highly likely to impact on Australia’s standing in international media freedom rankings like Reporters Without Borders’ (RSF’s) World Press Freedom Index. 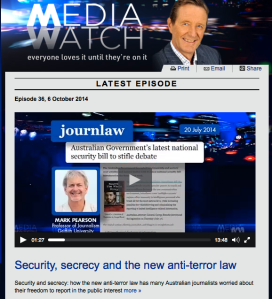 The legislation amended the Australian Security Intelligence Organisation Act 1979 (‘ASIO Act), and the Intelligence Services Act 2001 (bizarrely abbreviated as the ‘IS Act’).

The new law leaves journalists and bloggers liable to up to five years in jail for ‘unauthorised’ disclosure of information related to a special intelligence operation – and up to 10 years if the disclosure ‘endangers the health or safety’ of anyone or will ‘prejudice the effective conduct of a special intelligence operation’ (Section 35P of the ASIO Act).

The legislation seems aimed at whistleblowers like Edward Snowden or Wikileaks, but as Ben Grubb reported in smh.com.au, it casts its net so wide that it relies on the goodwill of the government of the day not to pursue ordinary journalists and commentators if they happen to stumble across such an operation and report upon it.

(a)  the person discloses information; and

(b)  the information relates to a special intelligence operation.

Speaking to The Australian’s legal affairs editor Chris Merritt this week, I suggested an operation like that involving former Gold Coast doctor Mohamed Haneef in 2006 might have triggered such a consequence if it had been deemed a ‘special intelligence operation’.

That particular arrest was the result of an Australian Federal Police investigation, but it is not beyond the realms of possibility to see ASIO involved in future such operations.

It was only thorough investigative reporting based upon leaks that led to a Gold Walkley Award for journalist Hedley Thomas at The Australian that exposed the flaws in the prosecution case against Haneef, and led to his later release and exoneration.

While Thomas and other national security writers would not want to compromise an anti-terror operation, you could certainly see them pursuing rigorous reporting of such a matter if a serious injustice appeared to be done or public safety was being placed in jeopardy.

And that is the problem – there is no ‘public interest’ defence available under the laws that have just passed both houses of the Australian Parliament.

Further, there is nothing that would prevent prosecution of a journalist who inadvertently disclosed information about such an intelligence operation in the course of their normal reporting.

I was discussing this today with another Walkley Award winning editor of a regional newspaper who was concerned that an operation conducted in a regional centre would be such big news that it would be difficult not to cover it.

That might well meet the definition of such a disclosure, and the reporters dealing with it would likely not be as well briefed in national security laws as their national and metropolitan counterparts.

Either way, and as I explained to Chris Merritt in that interview this week, the law now presents journalists with a potential new conflict between their code of ethics and the law over which they might face jail.

Journalists have traditionally been willing to go to prison to protect their confidential sources – and in fact three Australian journalists have done time for just that over the past three decades.

Now we have this new situation where some journalists might be willing to defy this new law – and face up to 10 years in jail – if they see an overriding public interest in revealing the nature of such an operation.

If they choose to do so, sadly there will be no defence available to them.

This is just one of a series of detrimental developments for media freedom in Australia in recent months which I have documented previously – all of which are likely to see Australia’s ranking decline in the RSF index which is being compiled over the next two months.

The Australian measures are already on the international radar, as a recent World Association of Newspapers (WAN-IFRA) blog by media academic Julie Posetti demonstrated.

My frank view is that Australia is an ‘emerging Secret State’ – a topic I will be addressing at an upcoming conference marking the 20th anniversary of the Pacific Journalism Review in Auckland in November.

Of course I do not suggest Australia is at the far end of the spectrum like North Korea, China or Vietnam. We do not have the licensing of journalists or the jailing or torture of those opposing the government’s line.

However, when compared with other Western democracies we do not have the safeguards of free expression protections in a Bill of Rights or in a major constitutional amendment as in the US.

Sadly, this means new gags like this measure can be rushed through Parliament by a government seeking a tougher anti-terror image and an Opposition fearful of being seen to go soft on national security.

'My frank view is that Australia is an ‘emerging Secret State’' http://t.co/ijH5oxj9L3 Wonderful article by Mark Pearson #press freedom

Mark Pearson on terror laws and the threat to journalists #auslaw http://t.co/IJzGBZOB6N

@JournLaw A big worry when journalists must rely on the charity of the govt not to pursue them.