How startups focus on the execution of business plans, with less intent on controlling IP

Entrepreneurs might undertake strategies that abandon formal IP protection in favour of being quicker to market and investing in capabilities – that is, focussing on an idea’s execution – University of Toronto Professor Joshua Gans told the 2015 IP and Media Law Conference, in his keynote address at the University of Melbourne Law School today (November 23). 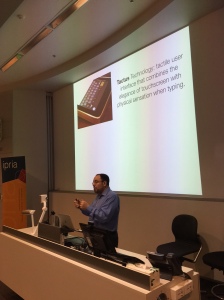 Professor Joshua Gans delivering the keynote to the Media and IP Law Conference at the University of Melbourne.

“Execution allows you to maintain market leadership so control buys you only delay,” he said.

“Control only is cost in that regard. It only delays you without giving you additional benefit.

“Even aside from resource constraint issues, control and execution are substitute strategies. The whole is not greater than the sum of the parts. You want to advise firms to pursue control or execution but not both.”

He explained execution-oriented firms will hit key milestones more quickly and will be less dependent on significant venture capital investment.

He argued against what he said was the common assumption of IP analysis that the strength and use of IP is exogenous.

“Here I argue that is is endogenous and depends on the choices of entrepreneurs/innovators in their business strategy,” he promised in his abstract.

“I demonstrate that entrepreneurs can undertake strategies that abandon formal IP protection in favour of being quicker to market and investing in capabilities — that is, focussing on execution.”

Joshua Gans is a Professor of Strategic Management and holder of the Jeffrey S. Skoll Chair of Technical Innovation and Entrepreneurship at the Rotman School of Management, University of Toronto (with a cross appointment in the Department of Economics). Since 2013, he has also been Area Coordinator of Strategic Management. He is also Chief Economist of the University of Toronto’s Creative Destruction Lab. In 2012, Joshua was appointed as a Research Associate of the NBER in the Productivity, Innovation and Entrepreneurship Program.

He has also co-authored (with Stephen King and Robin Stonecash) the Australasian edition of Greg Mankiw’s Principles of Economics (published by Cengage), Core Economics for Managers (Cengage), Finishing the Job (MUP) and Parentonomics (New South/MIT Press). Most recently, he has written an eBook, Information Wants to be Shared (Harvard Business Review Press).

The full conference program is here. Our paper (Pearson, Bennett and Morton) is titled ‘Mental health and the media: a case study in open justice’ (see earlier blog here).