[with research assistance from Virginia Leighton-Jackson]

Among more than 50 national security laws and amendments passed in Australia since 9/11, these four stand out as presenting the greatest threat to journalists … 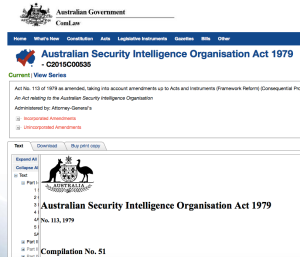 Section 34 gives ASIO powers to seek ‘questioning’ warrants and ‘questioning and detention’ warrants (detention for up to seven days) with five years’ jail possible for any revelation of the existence of the warrant itself or of any operation related to the warrant for up to two years after the warrant has expired. There are no public interest or media exemptions to the requirement, although disclosures of operational information by anyone other than the subject of a warrant or their lawyer requires the discloser to have shown ‘recklessness’ (s. 34ZS (3)).

Section 35P provides for up to five years in jail for ‘unauthorised’ disclosure of information related to a ‘special intelligence operation’ – and up to 10 years if the disclosure ‘endangers the health or safety’ of anyone or will ‘prejudice the effective conduct of a special intelligence operation’. Amendments partially exempting ‘outsiders’ (journalists) were proposed in 2016, but grave concerns remained over the impacts on journalists for ‘reckless’ disclosure that might endanger safety and jeopardise an operation and the implications for their sources.

Section 92 provides for 10 years’ imprisonment for anyone who identifies an ASIO officer or affiliate (or anyone connected with them) other than any who have been identified in Parliament (such as the director-general). Former ASIO employees and affiliates can be identified if they have consented in writing or have generally made that fact be known.

Section 3ZQT makes it an offence to disclose the fact that someone has been given notice by the Australian Federal Police (AFP) to produce documents related to a serious terrorism offence. Journalists could face up to two years in prison for doing so.

After amendments in 2015, the Act requires telecommunications providers to retain customers’ phone and computer metadata for two years so they can be accessed by criminal law enforcement agencies (State and Commonwealth) on the issue of a warrant. Information required to be stored includes: subscriber/ account information, the source and destination of a communication, the date, time and duration of a communication or connection to a service. A ‘journalist information warrant’ scheme was designed to prohibit the disclosure of journalists’ confidential sources without special precautions. These require approval of the Minister, who may act on the advice of a ‘public interest advocate’, though the processes are secret and disclosure of the details of any warrant for telecommunications data can incur imprisonment for two years.

National security has long been cited as one of the exceptions to the principle of open justice, but new laws give judges and magistrates more reason to close a court in a terrorism trial. The NSI Act allows for evidence to be suppressed in court hearings if it contains disclosures prejudicial to national security. Part 3 of the Act allows prosecutors and courts to use national security information in criminal proceedings while preventing the broader disclosure of such information, sometimes even to the defendant. Section 29 gives courts the power to decide whether to close the court for such matters.

Other laws to consider when covering a national security story:

Laws apply at state, territory and Commonwealth levels prohibiting racial and religious discrimination and the vilification of people because of their race, religion, or other factors. They vary in their scope and application, with debate over whether the law against offensive behaviour because of race, colour or national or ethnic origin in Section 18C the Racial Discrimination Act (Clth) would apply to discriminatory media coverage of Muslims. All media codes of practice and ethical codes counsel against discriminatory or vilifying coverage. Social media comment moderation presents special challenges.

If you are about to publish something damaging to someone’s reputation, ensure you work carefully within one of the main defences – truth (evidence to prove both the facts and their defamatory meaning), honest opinion / fair comment (based on true provable facts on a matter of legitimate public interest), or fair report (a fair and accurate report of a court case, parliament or another protected public occasion or document).

The sub judice period (limiting prejudicial coverage about a suspect) starts from the moment someone has been arrested or charged. From that instant you should take legal advice before publishing anything other than what has been stated in open court, with special care to avoid any material giving an assumption of guilt (or even innocence), visual identification of the accused if their identification might be at issue, witness accounts, character background, confessions or prior charges or convictions. You can also face contempt charges over refusing to reveal a source or provide your data or notes when ordered to do so, thus techniques for source protection are paramount.

Evershed, N., Safi, M., 19.10.2015, “All of Australia’s National Security Changes since 9/11 in a Timeline”, The Guardian Australia, available: http://www.theguardian.com/australia-news/ng-interactive/2015/oct/19/all-of-australias-national-security-changes-since-911-in-a-timeline

Related: See my piece from June 22 2015 in The Conversation : How surveillance is wrecking journalist-source confidentiality