I blogged in 2016 about a case where the mistaken identification of an innocent octogenarian tailor in place of his alleged gun-running son produced a useful case study for media law educators trying to explain the basic elements of defamation. 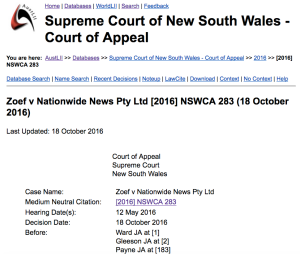 The first appeal is useful for educators explaining identification issues in defamation and the “offer of amends” defence requirements under s 18 of the Defamation Act 2005 (NSW) (Defamation Act) – and its equivalent in other Australian jurisdictions – while the 2017 appeal holds little value for media law teachers.

The case centred upon an article published in The Daily Telegraph on 22 August 2013.

It appeared a relatively straightforward case of confused identity, where the reporter mistakenly attributed to the older Mr Zoef – a suburban Sydney tailor – the alleged crimes of his son who lived at the same address. At trial, the sole basis on which Mr Zoef’s claim was dismissed was the newspaper’s defence that Mr Zoef had failed unreasonably to accept its offer of amends.

The article in the Telegraph (22-8-13, p. 9) carried the heading “Tailor’s alter ego as a gunrunner”, which might also make an interesting topic of discussion for students around the issue of sub judice contempt: Does such a heading carry a presumption of the accused’s guilt when accompanying a report of a preliminary court appearance? [The article in question is attached to the judgment as a pdf file.]

The article portrayed a then 81-year-old suburban tailor (with a distinctive surname ‘Zoef’) as a gun-runner who had been arrested, charged and appeared in court facing charges related to him holding a huge cache of weapons and ammunition at his home.

Police had indeed raided his premises and had found weapons and ammunition in the house’s garage, occupied by the tailor’s 43-year-old son, who shared his father’s name and was the actual individual who had appeared in court facing those charges.

As I blogged in 2016, the trial judgment by District Court Judge Leonard Levy is a fascinating one for student discussion because several basic concepts in defamation were contested and resolved, including:

The trial judge had held that, despite the serious errors in the reporting of the story and a dispute over whether the publisher’s offer of amends was reasonable and had been withdrawn, the newspaper was entitled to the offer of amends defence.

Taking into account the seriousness of the defamatory imputations and the significant hurt they caused the appellant, the damage to his business as a tailor, the unequal prominence the respondent afforded to the proposed correction and apology and their resultant inadequacy, the modest monetary component of the offer, and the likelihood of the proceedings being successful, the offer of amends was not reasonable. His Honour was in error in finding to the contrary and upholding the respondent’s defence under s 18 of the Defamation Act. (at para 78).

His reasons for that decision involved a step-by-step appraisal of the offer of amends defence and thus make useful instructional material for educators wanting to explain this defence to students. It should also serve to remind journalists that the offer of amends is very much a ‘lawyers’ defence’ – not something that should be handled by journalists or editors independent of legal advice – and given its time constraints it means that counsel from lawyers on the efficacy and wording of any such offer should be sought promptly.

The publisher also challenged the trial judge’s findings on whether the plaintiff had been identified in the article when it carried a photograph of his son and stated his age as 43 years old.

The Court of Appeal affirmed the trial judge’s decision that Mr Zoef Sr had been identified in the article despite those countering factors. Justice Gleeson ruled:

The article in this case contained a prominent and sensational headline, which, when read together with the first paragraph (par 29), would be reasonably understood to refer to the appellant. The strength of the general impression thereby created surpasses and dominates that of the subsequent reference in par 30 to a “43 year old” which is not something the ordinary reasonable reader might be expected to have focused on, let alone re-read or reviewed. It lacked the prominence of the sensational headline and the focus on the local, relatable indicia of the identified person’s name, profession and locality in the foregoing paragraph.

In respect of the photograph, his Honour’s finding that it was “immaterial” is supported by three considerations. One is that the photograph was small, cropped, and, as his Honour found, “less than distinct”. Next, the appellant gave unchallenged evidence in cross-examination that his son was not known to his customers. No identification would therefore have been made on a visual basis by the appellant’s customers. Finally, the use of historical photographs in newspaper articles is not so uncommon as to render unreasonable a conclusion by the ordinary reasonable reader that the article (with an unfamiliar photo) referred yet to the appellant. (paras 159-160).

So there you have it. The Zoef case – both at trial and on appeal – holds valuable lessons for media law students and educators are encouraged to use it as a case study. I have done so successfully with both journalists and tertiary students.