DEFENDING a defamation action using the truth or justification defence can have its hurdles, but this case we profile in the forthcoming sixth edition of The Journalist’s Guide to Media Law (Allen & Unwin, 2019) demonstrates how a major publication used it effectively.

In late 2015, The Australian newspaper published a print article (‘Watchdog Takes Peak Training College to Court’) and a similar online version (‘ACCC to Take Top Training College Phoenix Institute to Court’). The story was about proposed court action by the Australian Competition and Consumer Commission (ACCC) against a vocational training college called Phoenix Institute owned by the publicly listed Australian Careers Network. The article mentioned earlier media reports that alleged Phoenix had sent sales staff into housing commission estates, pressuring potential students to join up, and stated that the parent company was under investigation by both the federal Department of Education and the Australian Skills Quality Authority (ASQA) and that its shares had been suspended from trading on the stock exchange for the previous month. The article identified the plaintiff, Atkinson Prakash Charan, as one of the company’s heads and stated that he had amassed a $35 million fortune from the vocational education business. In short, it suggested that, ‘whilst under his management, VET organisations acted unscrupulously, in breach of regulatory standards, and that he made a large amount of money as a result of that conduct’ (para. 2). Mr Charan had in fact left the company about a year earlier and the next day The Australian published a correction to that effect in its print edition and later an online apology for the error.

The plaintiff pleaded that eight imputations arose from the article, which the judge grouped into four headings (para. 27):

The defendant, Nationwide News—publisher of The Australian—argued successfully that imputations 2 and 3 did not arise in the articles and defended the imputations of unscrupulous business practices and significant non-compliance with quality standards using the justification (truth) defence by proving that the imputations were substantially true as required under section 25 of the Defamation Act 2005. To prove the substantial truth of the unscrupulous conduct allegations, it had to convince the court under the civil burden of proof—the ‘balance of probabilities’—that there was ‘clear and cogent proof’. To do so, it drew upon a host of material obtained after the publication, including:

Justice Forrest found that the plaintiff was ‘was an entirely unreliable witness, not only on this issue but as to all matters relevant to his claim’ (para. 111). He concluded with a concise summary of his 768-paragraph judgment:

(a)   Mr Charan was defamed in both the written and online versions of the article;

(b)  the article defamed him by conveying imputations that:

(1)       Mr Charan managed a VET organisation which engaged in unscrupulous business practices which took advantage of vulnerable consumers which resulted in him making a large amount of money; and

I am satisfied that Nationwide has established the substantial truth of both imputations (paras 762–3).

Several lessons arise from this rare successful use of the justification (substantial truth) defence by a publisher: 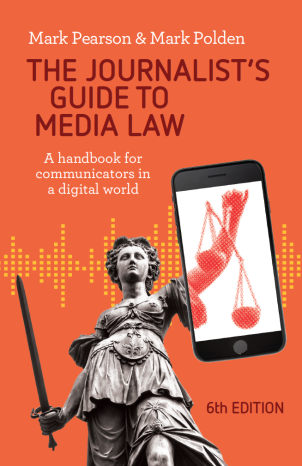 Like earlier editions, our text aims to give professional communicators and students a basic working understanding of the key areas of media law and ethical regulation likely to affect them in their research, writing and publishing across media platforms. It tries to do this by introducing the basic legal concepts while exploring the ways in which a professional communicator’s work practices can be adapted to withstand legal challenges.

If you wish to request a copy for course inspection or media review please contact the publisher, Allen & Unwin, who will have printed copies available from late November.

One response to “Defending truth: case study from our new edition”