The interplay between the Australian media and privacy laws has always been a struggle between free expression and the ordinary citizen’s desire for privacy. I have developed this timeline to illustrate that tension.

1827: NSW Chief Justice Francis Forbes rejects Governor Ralph Darling’s proposal for legislation licensing the press, stating: “That the press of this Colony is licentious may be readily admitted; but that does not prove the necessity of altering the laws.” (Historical Records of Australia, Series 1, Vol. 13, pp. 290-297) 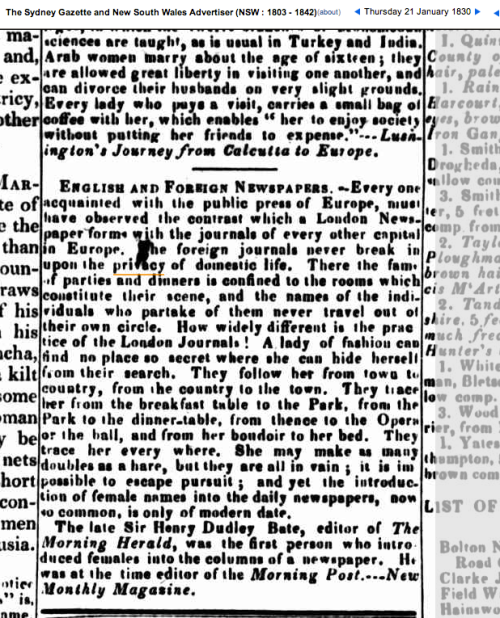 The extract from the Sydney Gazette in 1830

1830: The Sydney Gazette and New South Wales Advertiser publishes an extract from London’s New Monthly Magazine on the prying nature of the British press compared with its European counterparts, stating: “The foreign journals never break in upon the privacy of domestic life”. But the London newspapers would hound a ‘lady of fashion’ relentlessly: “They trace her from the breakfast table to the Park, from the Park to the dinner-table, from thence to the Opera or the ball, and from her boudoir to her bed. They trace her every where. She may make as many doubles as a hare, but they are all in vain; it is impossible to escape pursuit.”

1847: NSW becomes the first Australian state to add a ‘public benefit’ element to the defence of truth for libel – essentially adding a privacy requirement to defamation law (ALRC Report 11, p. 117)

1882: First identified use of the phrase ‘right to privacy’ in an Australian newspaper. Commenting on a major libel case, the South Australian Weekly Chronicle (22.4.1882, p.5) states: “A contractor having dealings with the Government or with any public body has no right to privacy as far as those dealings go.”

1890: In a landmark Harvard Law Review article, the great US jurist Samuel D. Warren and future Supreme Court Justice Louis D. Brandeis announce a new ‘right to privacy’ in an article by that very name. There is a ripple effect in Australia with several mentions of the term in articles between 1890-1900.

1937: A radio station used a property owner’s land overlooking a racecourse to build a platform from which it broadcast its call of the horse races. The High Court rules the mere overlooking of the land did not consti­tute an unlawful interference with the racing club’s use of its property. The decision viewed as a rejection of a common law right to privacy: Victoria Park Racing and Recreation Grounds Co. Ltd v. Taylor (1937) 58 CLR 479.

1948: Universal Declaration of Human Rights is proclaimed in Paris. Article 12 provides: “No one shall be subjected to arbitrary interference with his privacy, family, home or correspondence, nor to attacks upon his honour and reputation. Everyone has the right to the protection of the law against such interference or attacks” (United Nations Universal Declaration of Human Rights, GA. Res 217A(III), UN Doc A/Res/810 (1948).)

1979: Australian Law Reform Commission releases its first major report on privacy – Unfair Publication: Defamation and Privacy, ALRC 11. It recommends a person be allowed to sue for damages or an injunction if ‘sensitive private facts’, relating to health, private behaviour, home life, and personal or family relationships, were published about him or her which were likely in all the circumstances to cause distress, annoyance or embarrassment to a person in the position of the individual. Wide defences were proposed allowing publication of personal information if the publication was relevant to the topic of public interest. (pp. 124-125).

1980: Australia ratifies the ICCPR and the Organisation for Economic Co-operation and Development (OECD) expert group led by Australian Justice Michael Kirby issues its Guidelines on the Protection of Privacy and Transborder Flows of Personal Data.

1984: Australian Journalists’ Association (AJA) revises its 1944 Code of Ethics to include a new clause (9) requiring journalists to “respect private grief and personal privacy and shall have the right to resist compulsion to intrude on them”.

1988: The Privacy Act 1988 is enacted, applying initially only to the protection of personal information in the possession of Australian Government departments and agencies.

1999: Media Entertainment and Arts Alliance (MEAA) issues another revised Code of Ethics preserving the grief and privacy elements in clause 11.

2000: Privacy Act 1988 provisions are extended to larger private sector organisations, and 10 National Privacy Principles (NPPs) are introduced, determining how companies must collect, use and disclose, keep secure, provide access to and correct personal information. Media organisations are exempted from the provisions as long as they ascribe to privacy standards published by their representative bodies.

2001: High Court rejects an argument for a company’s right to privacy after animal liberationists trespass to film the slaughter of possums in a Tasmanian abattoir and someone gives the footage to the ABC, but the court leaves the door open for a possible personal privacy tort: Australian Broadcasting Corporation v. Lenah Game Meats (2001) 208 CLR 199.

2003: A Queensland District Court judge rules the privacy of the former Sunshine Coast mayor Alison Grosse had been invaded by an ex-lover who continued to harass her after their affair had ended. She is awarded $108,000 in damages: Grosse v. Purvis [2003] QDC 151.

2008: Australian Law Reform Commission releases its For Your Information: Australian Privacy Law and Practice (ALRC Report 108) recommending a cause of action for breach of privacy where an individual has a ‘reasonable expectation of privacy’, with a cap for non-economic loss of $150,000.

2011: Federal Government releases an Issues Paper floating a proposal for a Commonwealth cause of action for a serious invasion of privacy.

2 responses to “Updated: Privacy in Australia – a timeline from colonial capers to racecourse snooping, possum perving and delving drones”