Reporting Islam in the spotlight at #AEJMC16

My sabbatical semester travels now have me in Minneapolis for the annual convention of the Association for Education in Journalism and Mass Communication – #AEJMC16. 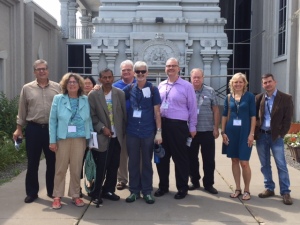 Visiting the Hindu temple in Minneapolis with the Religion and Media interest group from AEJMC with my Mindful Journalism co-author Shelton Gunaratne (front row, second from left). [Photo: Julie Pearson]

Our paper uses data from an Australian study to ascertain issues associated with news media coverage of Islam and Muslims from the perspectives of journalists, journalism educators and media trainers. We draw on data from interviews with 37 journalists, editors, educators, media trainers, Muslim community leaders and other experts located in Australia and New Zealand to explore their understandings of the ways stories about Islam and Muslims are reported and why.

We’re looking forward to the feedback from colleagues after two interesting sessions on similar topics yesterday.

On Wednesday we visited Muslim, Hindu and Christian places of worship in Minnesota with the Media and Religion interest group from the conference (pictured left).