MEDIA law students and colleagues will have undoubtedly noticed the Jehovah’s Witnesses pop-up stalls with religious books and magazines outside campuses and public transport stops, staffed by followers passively promoting their religion. 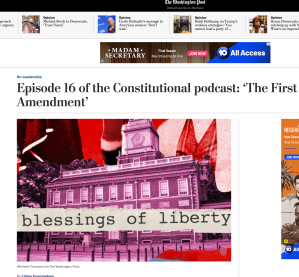 Yet few would realise the important role this religious group has played in cementing First Amendment rights in the United States, with a ripple effect for freedom of religion and free expression internationally.

That story is central to Episode 16 of the acclaimed Washington Post podcast ‘Constitutional’, available free here.

It uses the voices of constitutional experts and those who lived through the period to explain how a series of cases brought to the US Supreme Court by the Jehovah’s Witnesses forged the interpretations of the First Amendment that laid the platform for religious and media freedom – and free expression more generally – today.

More than 20 cases were brought in the midst of the Second World War. The religion lost the first two major cases, related to proselytising in public and the right of their children to refuse to salute the US flag at school.

But within two years the Supreme Court had overturned that decision, giving the First Amendment precedence over many other rights.

It is a compelling narrative and particularly well produced, and recommended listening for media law students.

Australia’s High Court has chosen to take a narrower approach to freedom of speech and religion in its interpretation of what it has called an ‘implied freedom to communicate on matters of politics and government’. In a comparable case in 2013, it declined a religious group’s attempt to use that implied freedom to proselytise in the centre of Adelaide.

Caleb and Samuel Corneloup were evangelical members of the fundamentalist ‘Street Church’, who preached in Adelaide’s busy Rundle Mall in a loud, animated and sometimes confronting style. Adelaide City Council tried to stop them, by using a by-law prohibiting anyone preaching or distributing printed matter on any road to any bystander or passer-by without permission.

The High Court majority held that the Local Government Act empowered the council to make the by-laws. They ‘were a valid exercise of the Council’s statutory power to make by-laws for the good rule and government of the area, and for the convenience, comfort and safety of its inhabitants’.

Although they ‘burdened political communication, they did not infringe the implied constitutional freedom’ because they served a legitimate end in a manner compatible with our system of representative and responsible government, the High Court said (Pearson & Polden, 2019)

© Mark Pearson 2019 – the moral right of the author has been asserted.