What are the key policy factors influencing courts and tribunals attempting to balance open justice against other rights and interests in newsworthy cases involving forensic mental health patients?

Associate Professor Tom Morton from UTS, ABC lawyer Hugh Bennett and I examined this question – and the related issue of whether the media could report upon such cases and identify the patients involved – in our recent article in the leading journal in the field, the Journal of Media Law. 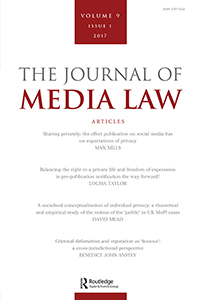 Here is our conclusion:

Open justice in mental health proceedings need not be viewed in a vacuum. There are strong parallels with numerous other situations where the legislature and the courts find and apply exceptions to the open justice principle. There is much scope for consistency across Australian jurisdictions and across the many situations where the restrictions are in place because of different vulnerabilities faced by key participants in the court process – mental health patients, children, sexual crime victims, family law parties, protected witnesses and, in two Australian states, even those accused of sexual offences until after the committal stage of proceedings.

There is a strong argument that the courts should be most transparent when the public gaze is so sharply focussed upon them, and that public education about the workings of the justice system in the important area of mental health will be most effective when citizens are intrigued by a particular story and know its background. The courts might acknowledge that in some circumstances a story can be both “interesting to the public” and “in the public interest” – and that perhaps the two notions might not have to be mutually exclusive as Lord Wilberforce so famously suggested.

We compared four forensic mental health cases in Australia and the UK and highlighted some of the key competing rights and interests at stake when the news media or other parties seek to have mental health proceedings opened and to identify the patients involved. The approaches of the tribunals and courts we  studied showed the competing policy considerations in such applications were by no means clear-cut. They varied markedly from case to case with regards to the potential impact on the patient and other stakeholders and in their respective public interest value in the stories being told to broader communities. Policies around publicity are complicated when expert psychiatric opinion varies on the potential impact on the mental health and treatment regime for the patient.

The weighing of such important rights and interests is not a precise science where a pre-set formula will apply. Of course, important differences between Australian and UK jurisdictions inform such decisions, including different statutory frameworks for the particular tribunals, together with the lack of a formal human rights framework in Australia, comparable with the European Convention on Human Rights, which affords privacy and free expression rights. In Australia, these considerations draw upon the common law, because there is as yet no actionable tort of privacy invasion and free expression is limited to a High Court-designed implied constitutional freedom of communication with respect to “discussion of government and political matters”. Further, the various mental health tribunals dealing with applications from or regarding forensic patients operate within their own statutory frameworks, rules and practice directions which sometimes bind, and in other circumstances guide, their decisions on whether hearings can be held in public and, if so, whether parties and other participants might be identified.

In Australia alone, the nine jurisdictions have taken a variety of approaches to whether such hearings are held in public and whether parties must be anonymised in any reporting permitted. Open justice can be viewed as a policy continuum, ranging from closed hearings and a total ban on reporting at one end through to open hearings with full identification of parties allowed as part of a fair and accurate report of proceedings at the other. Somewhere in between are attempts to strike a balance between open justice and competing rights and interests with partial permissions; where the public or the media might be admitted to proceedings with a range of conditions placed upon the extent of identification of parties or witnesses allowed.

We developed  this list of key policy factors elicited from the cases reviewed, influencing whether a forensic patient or former patient might be given a public hearing or be identified in proceedings:

Mental health and the media: a comparative case study in open justice

Our article comparing Australian and UK restrictions on the reporting of forensic mental health cases has appeared in the leading journal in the field, the Journal of Media Law.

Here is our abstract:

Media reportage about forensic mental health cases raises several competing rights and interests, including the public interest in open justice; a patient’s right to privacy, treatment and recovery; the public’s right to know about mental health tribunal processes; and victims’ and citizens’ interests in learning the longer term consequences of a publicised serious unlawful act. This article details a case study of successful applications for permission to identify a forensic mental health patient in both a radio documentary and in research blogs and scholarly works in Australia. It compares the authors’ experience in this case with three other cases in Australia and the UK, and identifies and weighs the competing policy issues and principles courts or tribunals consider when attempting to balance open justice with the rights and interests of a range of stakeholders in forensic mental health cases where the news media and/or patients are seeking publicity and/or identification.