Broadcaster, tweeter, blogger and veteran journalist Derryn Hinch – the self-proclaimed ‘Human Headline’ – has been released from jail after serving a 50 day sentence for breaching a suppression order. 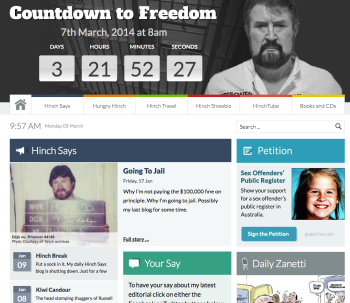 Hinch had refused to pay a $100,000 fine over his blog and Twitter comments including suppressed background material on Adrian Ernest Bayley, accused of the Melbourne murder of Irish woman Jill Meagher.

Hinch has been jailed twice, fined and sentenced to home detention for his contemptuous reportage and commentary about sex offenders over more than a quarter of a century.

While much of the coverage of his prosecutions and trials has focused on his cavalier and principled stance in the vein of his ‘Human Headline’ moniker, he has also been responsible for a body of case law covering sub judice contempt, the naming of a child sexual assault victim and the defiance of suppression orders – in his television and talkback radio programs, blogs and Twitter feeds.

I am preparing a paper for the ANZCA conference in Melbourne in July, reporting on a legal and textual analysis of eight key Victorian and High Court cases involving Hinch as a party in 1986, 1987, 1996, 2011 and 2013.

It reviews these key cases involving Hinch as a defendant and an appellant since 1986 – including Magistrates, Supreme Court, Court of Appeal and two High Court judgments – and identifies the key media law principles shaped in the process.

It concludes that the Hinch legacy is far more significant than his shallow ‘Human Headline’ title suggests – and ventures into important human rights questions arising in the complex legal and moral terrain where free expression, the ‘public interest’ and the ‘public right to know’ compete with an accused’s right to a fair trial, an ex-prisoner’s right to rehabilitation and a child’s right to protection from sexual predators.

For example, Hinch’s appeal to the High Court over his contempt conviction in 1987 was unsuccessful but resulted in a broadening of the public interest defence to sub judice contempt.

His latest case offers an excellent summary of the relevant factors considered in deciding whether there is a real risk of prejudice to a trial, because Hinch was acquitted on a second contempt charge that his blog ‘had a tendency, or was calculated, to interfere with the due administration of justice in the trial of Bayley’.

Victorian Supreme Court Justice Stephen Kaye ruled that three factors combined to reduce the tendency of Hinch’s blogging to prejudice potential jurors: the small readership of the article, the period of delay between the publication of the article and the likely trial date of Bayley, and other prejudicial material about Bayley circulating in the media and social media at the time (para 114). While ‘highly prejudicial’, Justice Kaye had a ‘reasonable doubt’ in light of those three factors that the article would have prevented Bayley getting a fair trial.

I will post updates on this paper as the research and writing unfolds. Meanwhile, no matter what you think of Hinch’s bravado in his naming and shaming of sex offenders, at least this week we should be able to celebrate the release of an Australian journalist from jail.

3 responses to “The Human Headline legacy – the jailed Hinch, suppression and free expression”